What are Power-to-X solutions?

This article provides an overview of the various Power-to-X solutions. It explains what is Power-to-X, why it is important for decarbonization and how it can be used for efficient utilization of variable energy sources. The various energy carriers that can be used to store renewable energy for later use, or for easier transportation, are summarized. The benefits and challenges of Power-to-X are discussed and examples of various solutions being implemented around the globe are presented.

Advancement in technology has led to a massive decline in the cost of renewable power. Since 2010, the generation cost of solar power has fallen by 80%. During the same period, the cost of wind generation has declined by 30-40%.

As a result, there has been a steep rise in the production of Variable Renewable Energy (VRE). VRE refers to energy that is produced intermittently due to the nature of the generation process instead of on-demand as with traditional generation. Apart from solar and wind, VRE sources also include tidal, and hydroelectric power. It is projected that by the year 2030, more than 80% of power generation in Europe will be from VRE sources. 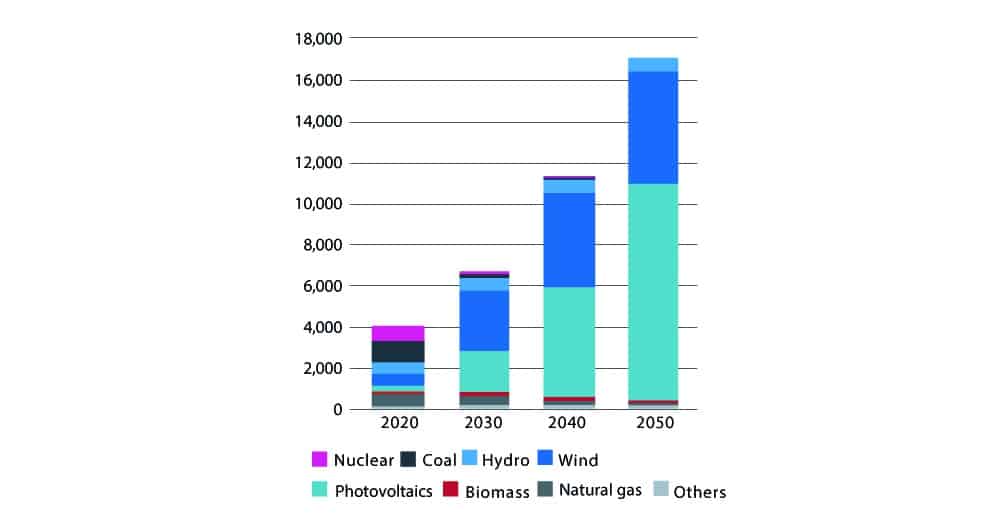 Power-to-X (also known as P2X or PtX) describes the conversion of renewable electricity from wind, water or solar as primary energy into an energy carrier (“X”).

P2X allows storage of excess energy for later use while also absorbing energy fluctuations. These solutions provide an efficient alternative to curtailment of power generation during periods of surplus production.

In addition to balancing supply and demand, P2X solutions also offer the opportunity to reduce global CO2 emissions, which in turn has a positive impact on achieving the goals set out in the Paris Agreement. The Paris Agreement provides a roadmap for growth based on low-carbon energy, with the target of replacing fossil fuels with carbon-neutral or zero-carbon energy.

Power-to-X technologies can be subdivided according to intended use or form of energy.

In this article, we limit our further explanations to Power-to-X technologies by energy form. 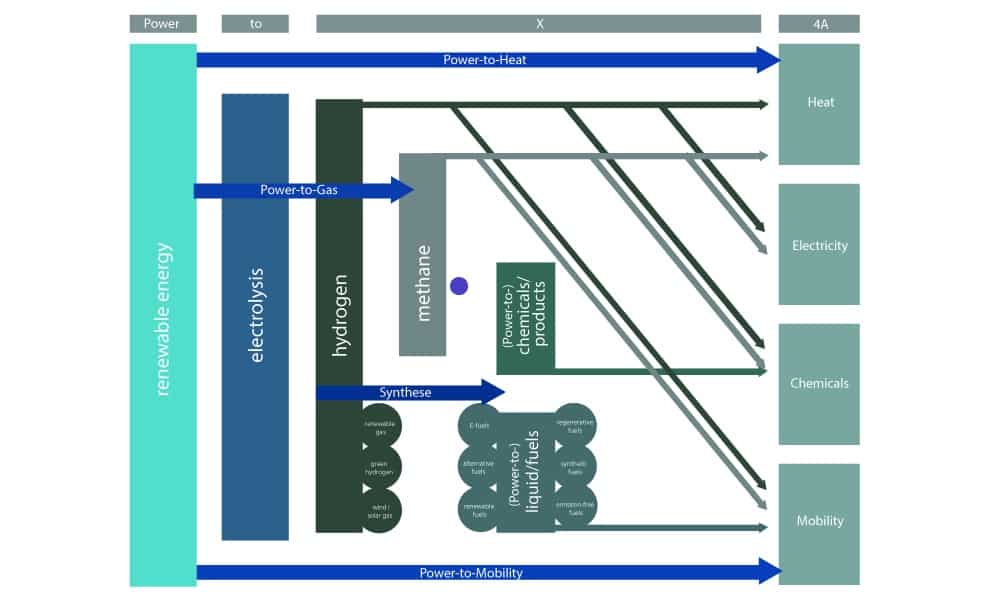 Power-to-Hydrogen is the process of splitting water (H2O) into hydrogen and oxygen using electricity, through process called electrolysis. When renewable power is used for this process, hydrogen becomes a complementary carrier of renewable energy.

Direct current electrolysis has a maximum efficiency of 80-85%. The round-trip reconversion efficiency for hydrogen storage is, however, between 35–50%. While the round-trip conversion efficiency is lower, as compared to batteries, and the electrolysis process can be expensive, storage of hydrogen is quite inexpensive. This allows large amounts of energy to be stored for long periods making hydrogen ideal for seasonal storage.

Power-to-Hydrogen offers very high system flexibility, but requires large investments in technology and infrastructure. It also requires significant changes in the regulation framework and moderate adjustments in the role of actors in the energy sector.

Power-to-Gas describes the process in which water (H2O) is split into hydrogen (H2) and oxygen (O2) by electrolysis using electricity.

This hydrogen can be further converted into methane (CH4) through a process called methanation. Hydrogen is reacted with carbon dioxide to produce synthetic natural gas (SNG). SNG can be stored for an extended period or used to produce electricity through conventional systems that run on natural gas. Methane reconversion technologies include gas turbines, CCGT plants, and reciprocating engines.

Power-to-Gas solutions are especially useful as they take advantage of existing storage facilities and transportation infrastructure. The synthetic fuel can be stored on site for later use, fed into the natural gas grid, or transported using trucks or ships to other markets.

Power-to-Methane is a carbon-neutral solution as captured CO2, used in the production of methane gas, is released when the gas is finally consumed with no net increase in carbonization. SNG can act as a transition resource in the ultimate replacement of fossil fuels with synthetic fuels. The main advantage of SNG production from renewable power is that existing gas infrastructure can be used without any modifications. 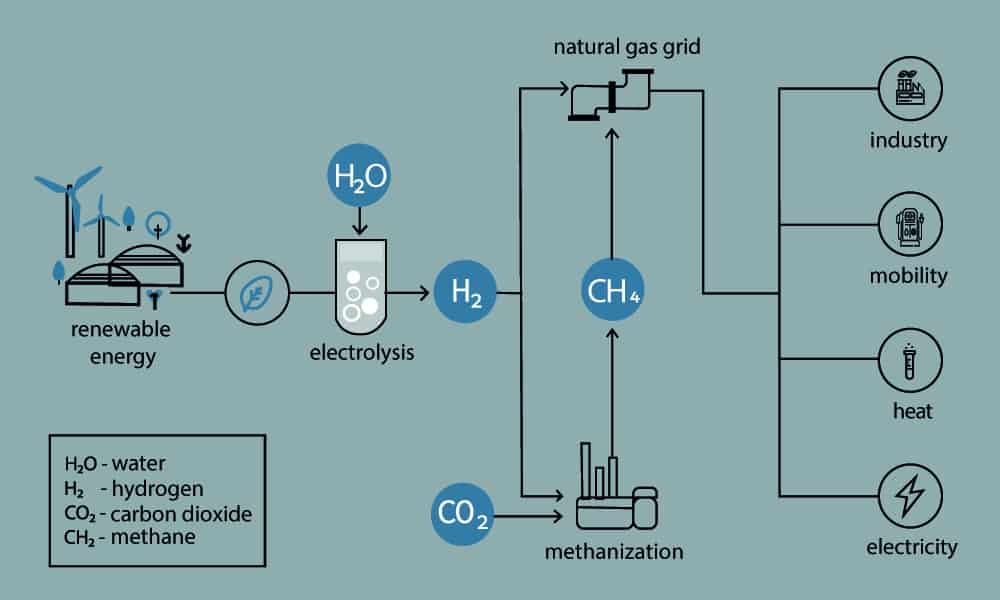 Hydrogen produced from electrolysis of water, powered by renewable energy, can also be converted to liquid fuels such as methanol, oxymethylene ether (OME), synthetic crude, gasoline, diesel and jet fuel.

Liquid hydrocarbons can be produced through the Fischer-Tropsch process. These liquids offer higher energy density that is necessary to power aircrafts, ships and other power-intensive modes of transportation over long distances.

Power-to-Liquid technologies offer drop-in replacements for fossil fuels that are compatible with the existing infrastructure. Oxygenated fuels based on methanol, such as OME and, DME are gathering interest as they offer improved combustion properties with reduced emissions. 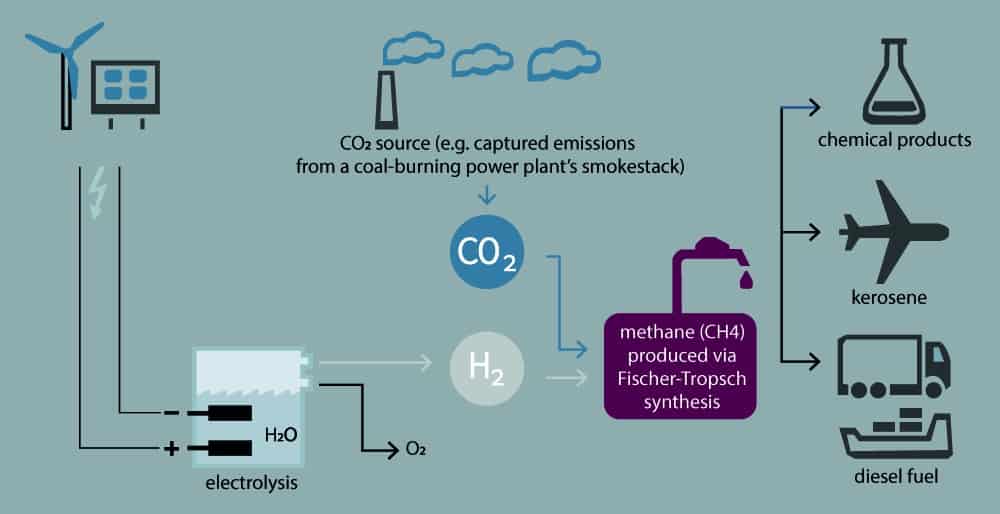 Power-to-Heat solutions are useful for demand-side management applications, such as peak shaving and load shifting. These solutions can be centralized or decentralized. In centralized heating systems, also known as district heating systems, large electric boilers generate heat at a central location, which is then transmitted to buildings through a pipe network. Decentralized systems consist of heat generators at individual buildings or residences.

Power-to-Heat solutions have high potential for increasing the flexibility of VRE plants. Heat can be stored in large water caverns, aquifers, or containers to manage seasonal demand and supply gaps. These solutions require moderate investment in technology and infrastructure and some changes in the regulatory framework. The required changes in the roles of actors in the energy supply chain are minimal. 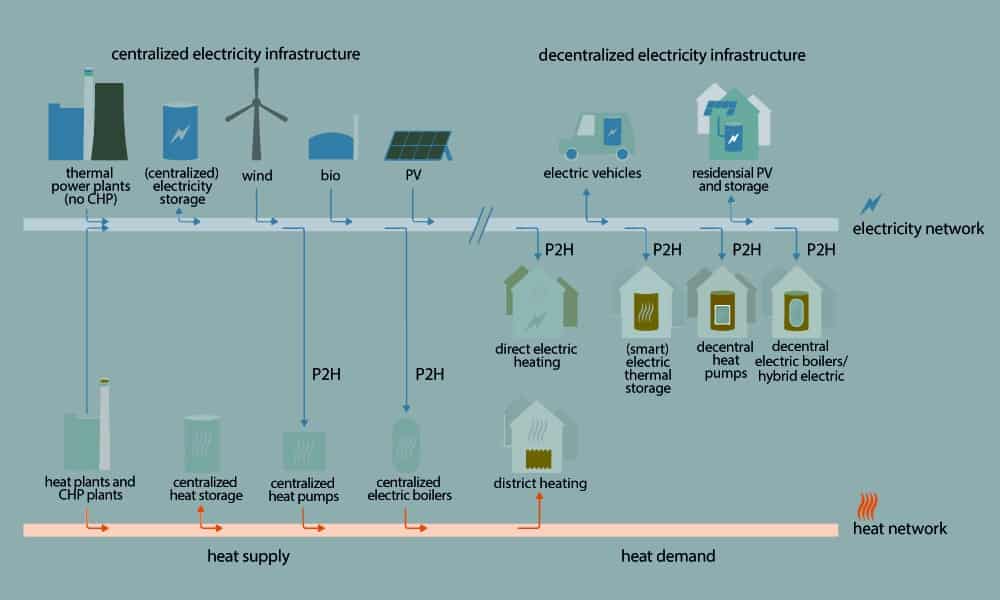 P2X technologies can facilitate the integration of variable renewable energy into traditional power grids by balancing demand and supply. Excess energy can be converted to hydrogen or other synthetic fuels for storage. These fuels can be stored and converted back to electricity when generation from the renewable source is insufficient.

P2X solutions can also help in extending the use of renewable energy to sectors that are not directly connected to the electricity grid such as transportation, heating, and cooling. The coupling of these sectors with renewable power, through P2X solutions, can accelerate their decarbonization. An electrolyzer connected to the utility grid also provides flexible, low-cost load balancing services to the power system. It can be cycled up and down rapidly to balance demand and supply.

P2X solutions can also be used to supply energy from areas with high generation to areas with high demand. For example, some of the best wind resources are often located offshore or in rural areas where demand is low. Wind energy can be converted to hydrogen, which can then be transported to regions with energy deficits or high demand. P2X solutions also facilitate wind and solar power development without the need for large investments in transmission lines.

The benefits of P2X solutions are summarized below:

The cost difference can partly be attributed to the decentralized nature of P2X plants. Currently, most P2X projects are small-scale.  Traditional processes take advantage of economies of scale to negotiate lower feedstock pricing.

Furthermore, most P2X solutions require relatively high capital costs to implement. Plant economics are, however, expected to improve further as a result of declining renewable electricity prices and technological advancements that are improving the efficiency of the electrolysis process.

Some of the challenges in the implementation of P2X solutions are summarized below:

P2X solutions are being implemented on an industrial scale around the globe to accelerate our journey towards an emission-free future. Although most currently installed projects are still on a relatively small scale, ranging from 5-100 MW, they are expected to become key stepping stone towards the implementation of more efficient large-scale plants. Some of these pioneering projects are discussed below.

In Denmark, Air Liquide along with other technological and commercial partners has installed a power-to-Hydrogen project named HyBalance. The project, completed in October 2020, is intended to demonstrate the role of hydrogen in energy systems. Hydrogen is produced from water electrolysis powered by electricity from wind turbines. The project helps balance the grid, and provides hydrogen gas for use in clean transportation and the industrial sector. The project will help in identifying additional revenue streams from hydrogen. It will also help in the development of a regulatory environment necessary to improve the implementation of power-to-hydrogen solutions.

In Rhineland, Germany, a 10 MW electrolyzer has been installed at a large oil refinery, to provide hydrogen for refinery operations. The REFHYNE project is expected to replace the existing hydrogen supply from steam methane reformers. The electrolyzer will also be useful in balancing the refinery’s internal electricity grid that provides primary control reserve services to German transmission system operators. The pilot project will provide data necessary to identify conditions under which an electrolyzer can become financially feasible. Plans for a larger 100 MW electrolyzer at the same refinery, are also in the works and rely upon the results of the pilot project.

In China, the Chinese National Energy Administration is installing electric boilers with a capacity of 50 MW, in the Inner Mongolia Autonomous Region to avoid curtailment of wind power generation. The region has more than 22.3 GW of installed wind power but up to 15% curtailment was necessary due to transmission constraints. The heat generated will be provided to the district heating system that previously depended on coal boilers. The project will replace about 2.8% of annual district heat generation.

In Sweden, the utility company Vattenfall is investing around EUR 100 million in three Power-to-Heat units with a combined heating capacity of 120 MW. Excess wind energy will be used to heat water, that will be transmitted to residences and commercial buildings. These units have been designed to replace a coal-fired plant with a capacity of 330 MWh.

Airbus sees Power-to-Liquid (PtL) as a key solution in terms of climate impact as well as cost and scalability. PtL promises to provide an alternative fuel that is JetA/JetA1-approved. The company has partnered with the SAF+ Consortium to target wide-scale PtL production. The alternative fuel offers the high energy density, required for high-power transport modes over long distances. The pilot plant, located near Montréal, Canada started production in 2021. Large-scale industrial production is expected by the year 2025.

Power-to-Hydrogen projects help in extending the use of renewable energy to sectors disconnected from the power grid while also providing load balancing services.

Power-to-Heat solutions help connect the power grid to central heating systems. These solutions can help reduce use of fossil fuels while making use of excess generation capacity.

Power-to-Gas solutions are especially useful in the transportation infrastructure.

And Power-to-Liquid technologies offer drop-in replacements for fossil fuels that are compatible with the existing infrastructure.

Numerous Power-to-X projects have already been put into service around the globe. Although most of these pioneering projects have been implemented on a limited scale, the valuable data and experience gained from these projects will facilitate implementation of large-scale solutions that are already being planned and installed.

Energy producers, utility companies, logistical solution providers, and large industrial consumers of energy are gearing up to implement and reap the benefits of Power-to-X solutions.

PrevPreviousWhat are the main issues in obtaining a representative sample in NG applications?
NextReliable and accurate sampling system for natural gas applicationsNext